Great news for undergraduates in STEM fields: The Barry M. Goldwater Foundation has more than doubled the number of annual scholarships it awards to sophomores and juniors who have outstanding potential to do research. Along with the Truman Scholarship, generally awarded to college juniors, the Goldwater Scholarship is the most prestigious undergraduate award. It is also closely linked to success in achieving prestigious post-graduate scholarships.

More good news: 252 of the Goldwater Scholars in 2019 are young women. 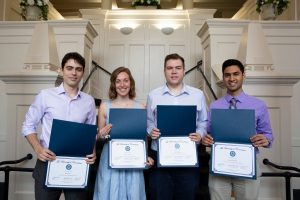 UConn Has Four Goldwater Scholars in 2019

“From an estimated pool of over 5,000 college sophomores and juniors, 1223 natural science, engineering and mathematics students were nominated by 443 academic institutions to compete for the 2019 Goldwater scholarships. Of students who reported, 241 of the Scholars are men, 252 are women [493 total], and virtually all intend to obtain a Ph.D. as their highest degree objective. Sixty-two Scholars are mathematics and computer science majors, 360 are majoring in the natural sciences, and 74 are majoring in engineering. Many of the Scholars have published their research in leading journals and have presented their work at professional society conferences.”

In 2018, the foundation awarded only 209 scholarships.

“Many of the Scholars have dual majors in a variety of mathematics, science, engineering, and computer science. Scholars have impressive academic and research credentials that have garnered the attention of prestigious post-graduate fellowship programs. Goldwater Scholars have been awarded 92 Rhodes Scholarships, 137 Marshall Awards, 159 Churchill Scholarships, 104 Hertz Fellowships, and numerous other distinguished awards like the National Science Foundation Graduate Research Fellowships.”

The public universities with four Goldwater Scholars in 2019 are listed below:

Those with three awards in 2019 are below: