Editor’s note: Our thanks to the University of Georgia for much of this information.

One of the best and oldest public university honors programs in the nation is at the University of Georgia–and now it is set to become the Morehead Honors College at UGA, funded in part by an honors endowment approaching $10 million.

The new honors college will be named after President Jere Morehead, an altogether fitting move based in part on his former leadership of the honors program from 1999 to 2004. The program began in 1960, placing it among the five or six most longstanding programs in the nation. Since 2012, we have rated the program as among the very best, giving special nods to its undergraduate research emphasis and to its outstanding record of mentoring students who have won Rhodes, Marshall, Truman, and Goldwater Scholarships. 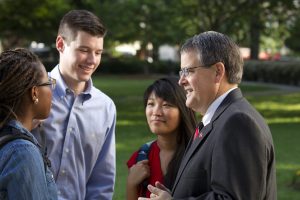 “Over the last quarter century, UGA became a recognized leader with regard to nationally and internationally competitive major scholarships. Consider that while UGA had only two recipients of the Rhodes Scholarship between World War II and 1995 (in 1960 and 1973), during the past 25 years UGA has produced nine Rhodes Scholars and, as a result, UGA now trails only UVA and UNC in the number of Rhodes Scholars produced by a public institution during this time period,” according to Dr. David S. Williams, who succeeded Dr. Morehead as director in 2004. 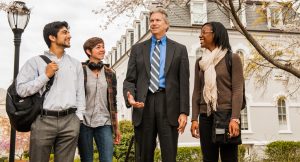 “This record of success with regard to external scholarships has continued since 2014, including the following significant achievements: (1) five Schwarzman Scholars since the introduction of this prestigious new award in 2016; (2) at least one national Rhodes finalist each year, with a Rhodes Scholarship recipient in 2017; (3) one Marshall Scholar in 2016; (4) UGA’s first two Beinecke Awardees in 2017 and 2019; (5) UGA’s first Knight-Hennessy Scholar in 2019, and a second one in 2020; (6) UGA’s first Churchill Scholar in 2019; (7) three Truman recipients; (8) seven Udall recipients; and (9) 17 Goldwater recipients, including the institutional maximum of four recipients in 2019.”

The fundraising campaign has raised more than $8 million of its $10 million goal, with plans to use an endowment to fund new, permanent and robust support for academic programming, undergraduate research, study abroad and internship opportunities for Honors students.

“Upon learning of this action, it is difficult for me to adequately express my appreciation to the UGA Foundation Trustees, other donors, the chancellor and the Board of Regents for making this incredible honor possible,” said Morehead. “Working with the Honors Program—as its director and continuing as provost and president—has been one of the most rewarding and meaningful experiences of my career. I am humbled and deeply grateful.”

As honors director, Morehead help to create the Washington Semester Program that has sent more than 2,000 students to work as interns in the nation’s capital. He also created the Center for Undergraduate Research Opportunities (CURO), a model for undergraduate research programs in honors programs and universities.

“What President Morehead did in his time as Honors Program director established a great precedent for our faculty and administration, and it built a springboard for all the students who have entered our program since,” said Dr. Williams, the current director. “UGA Honors is today regarded as one of the finest public university honors programs in the country—due in no small part to the accomplishments of the president’s tenure—so it is exciting to imagine where we go from here.”

Deep Shah, a 2008 alumnus and now a physician in Atlanta, said that Morehead’s “commitment to elevating both the university and the Honors Program was evident to me then. As I have come to know him more as an alumnus, that commitment has become even more clear as have the results of his efforts. I can think of no one more deserving of this honor.” Dr. Shah was named a Rhodes Scholar in 2008.

Under Morehead’s long tenure as president, UGA’s four-year completion rate rise from 61% to 71% and its six-year completion rate climbed to 87%. UGA has been rated a top 20 public university by U.S. News & World Report for five consecutive years, most recently being ranked at No. 15.