A recent, excellent piece in Inside Higher Ed, by Rick Seltzer, explores the pros and cons of public honors colleges’ charging extra fees (or differential tuition) in order to enroll and serve increasing numbers of honors students.

(Here we can pretty much confine the discussion to honors colleges because honors programs rarely charge significant fees for attendance.)

At the end of this post is a list of honors colleges that have significant honors fees, and the fee amounts.

Much of the piece involves Barrett Honors College at Arizona State, and Barrett Dean Mark Jacobs is a proselytizer for charging the extra fees and is proud that Barrett has been successful, telling Inside Higher Ed that “when you’re an educational institution, the best you can talk about in terms of the effect outside your own institution is hoping that good ideas you have might be copied and used by other people, or translated to fit their context.”

Jacobs is in a position to know whereof he speaks; he has bachelors with high honors from Harvard, a Ph.D. from Stanford, and he had an endowed chair in biology at Swarthmore.

Another argument is that state funding cuts have put public universities in a bind, and the extra fees for honors help expand those and other programs at the universities. In addition, public honors colleges (and programs) give highly-talented students in-state options that are in great need given the increased selectivity and arbitrary admission standards of elite universities.

One thing not in doubt is whether the practice at Barrett has helped financially. “In 2017,” Seltzer writes, “the college draws 36 percent of its budget from general operations and 4 percent from endowment income. A whopping 60 percent of the budget comes from the fee.”

On the other hand, Bette Bottoms, dean emerita at the University of Illinois Honors College and a longtime leader in honors education, maintains that universities should value their honors colleges enough to put institutional money into them and not ask students to pay the costs.

“Now, if you tell me that Arizona [State] has some way of waiving the fee for lower-income students, that makes the model more palatable, but I still don’t agree with it,” she told Seltzer. “Do incoming students know this? We never charged a fee, and I found that prospective students and their families often expected it anyway — I’m sure this kept some students from even considering applying.”

The Barrett model has influenced at least a few other honors colleges. The new Lewis Honors College at the University of Kentucky will charge a $500 annual fee. The namesake of the LHC, Tom Lewis, donated $23 million to his alma mater to create the new honors college. He is also an Arizona resident and longtime supporter of Barrett, who likely believes the Barrett model is a good one to follow.

But not entirely. Dean Christian Brady, formerly dean of the well-known Schreyer Honors College at Penn State, recognizes the good work of Dean Jacobs at Barrett, but believes honors colleges should not be so physically separated as Barrett is on the ASU campus. He wrote at length about his philosophy on this site two years ago.

The issue of elitism at honors colleges (and programs) is also a factor. Even though Barrett goes out of its way to connect hundreds of ASU faculty, honors students, and non-honors students through the extensive use of honors contract courses, the physical separation of the honors campus can be a negative for some while it is a positive for others.

Our own view is that the extra fees can have an overall positive impact if they do not exceed, say, 5% of the in-state cost of university attendance and if the honors colleges have resources to assist students for whom the fee is a burden.

Another way to measure the impact of the extra fees is to analyze the extent to which they might discourage students from completing the full honors curriculum.

The honors college that charges the most in extra fees (actually differential tuition) is the Clark Honors College at the University of Oregon. There, students face an extra charge of $4,192 per year, which amounts to a 15.8% increase in tuition. Some scholarships to offset the very considerable charge are available after the first year.

It may be noteworthy that Barrett and Clark have similar student profile stats, though Clark students have somewhat higher test scores (new SAT 1410 to new SAT 1350). The six-year grad rate for Barrett honors entrants was 89% and for Clark entrants, 82%.

Oregon State Honors College has a differential charge of $1,353, not too much below the fee at Barrett. Oregon State honors entrants had a six-year grad rate of 87.6%, with a sizable portion of engineering students. The average (new) SAT at the OSU Honors College is about 1430.

While this is not definitive data, it only makes sense that the greater the differential cost, the more honors students will be forced to balance the value of their honors education against the cost or simply conclude that they cannot afford honors at all.

Except for the nuts and bolts metrics used by U.S. News in its annual college rankings (grad and retention rates, class sizes) all of the other ranking categories receive strong criticism from education writers and the academic community. A category since 2009, the high school counselor rankings of colleges’ reputations fly a bit under the radar. But the fact is, they do appear to have a curious impact on the rankings.

A recent, excellent article about the rankings on the website Politico argues that the counselor rankings rely heavily on “guidance counselors from highly ranked high schools, while many high schools in less affluent areas have few or no counselors.”

According the the Washington Post, the rankings do include “surveys of 2,200 counselors at public high schools, each of which was a gold, silver or bronze medal winner in the 2016 edition of the U.S. News Best High Schools rankings.” U.S. News also surveys “the largest private independent schools nationwide.”

This already elite group of respondents is even more restrictive than it seems: “The counselors’ one-year response rate was 7 percent for the spring 2017 surveys,” according to U.S News.

Using a sample of 60 national universities that are either in the top 50 nationally or have at least 7 nationally rated academic departments, we found that the high school counselor rankings of private colleges were about 11% higher than those of university peer rankings of the same colleges. (Twenty-five of the schools are public, while 35 are private.)

The main question at hand is, do these (few) counselors have more useful knowledge about national universities that peer reviewers have? Peer reviewers have a response rate of more than 40%; this much broader response rate (in absolute percentages and, almost certainly, demographically) should yield a more accurate assessment from peers. (Even more accurate would be the academic departmental rankings, but those are not included.)

Again using the same data set we cite above, a side by side comparison of peer and counselor assessments reveals the following:

–Of the 14 universities that rose in rankings at least two places, three were public universities (21.4%) while 11 (78.6%) were private universities. (The percentage of universities in the sample is 41.7% public and 58.3% private.)

Below is a table showing the side-by-side comparison. Please bear in mind that the rankings are our adjusted rankings, not the actual U.S. News rankings.

The critics of the annual–and hugely popular–U.S. News Best Colleges rankings are vocal, large in number, well-armed with data, and mostly unavailing. Here is another attempt, based on the idea that the “financial” metrics used in the rankings distort the results. If Harvard has a zillion dollars, Harvard will have smaller classes than Mammoth State University with its meager funding per student. But why give Harvard credit for the zillion dollars and the smaller classes, when the smaller classes are the “output” that really matters?

So…the adjusted rankings below use the major non-financial metrics only: Peer assessment of academic reputation; high school counselor recommendations; graduation rates; retention rates; and class sizes. No acceptance rates or test score-related metrics are used. The impact of both are reflected in the output metric of graduation rates. (A separate post will discuss the curious disparities in high school counselor recommendations.)

Each of the universities on the list is in the top 50 in the 2018 U.S. News rankings with at least 7 ranked departments or has an aggregate academic department ranking of 50 or better across a minimum of 7 departments. The departments ranked are business and engineering (undergrad); biology, chemistry, computer science, earth sciences, economics, education, English, history, math, physics, political science, psychology, and sociology (graduate level).

Therefore, even though department ranking data are not included in the adjusted rankings below, they are used as part of the eligibility requirements for inclusion.

Below are the adjusted rankings of 60 national universities, in the order of the adjusted ranking. Also shown are the U.S. News rankings for 2018 and the difference between the adjusted rankings and those of the magazine.  We used data from U.S News for the categories listed above, with the same weight assigned to each category. All categories were then standardized and aggregated. After the first fifteen or so schools, some of the disparities are striking, especially for the last half.

Especially notable in the list below are the changes in major public universities.

Editor’s Note: The following information is from the University of Arkansas Honors College. The college dean has designed the Honors Passport experiences, a capstone course abroad. “Honors Passport courses send honors students and top faculty scholars to historically and culturally significant sites around the globe. During these two-week intersession courses, each student much research and present on a historic site, monument or notable individual, taking an active role in teaching the course.”

Sixteen Honors College students recently spent a full semester preparing for study abroad in Peru, and landed in Lima well-versed on the Incan Empire, the Andean Hybrid Baroque and indigenismo. 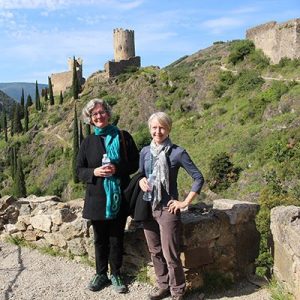 “The idea is to create an international capstone experience where students and professors together explore the interaction of contemporary and historical sites, texts, and artifacts,” said Honors College Dean Lynda Coon.

Honors College Dean Lynda Coon has launched a series of innovative honors courses since joining the history faculty in the J. William Fulbright College of Arts and Sciences in 1990. She helped to create the Honors Humanities Project (H2P) and as dean she has developed Signature Seminars, Forums, Retro Readings courses and this Honors Passport study abroad experience. Coon’s research focuses on the history of Christianity from circa 300-900. 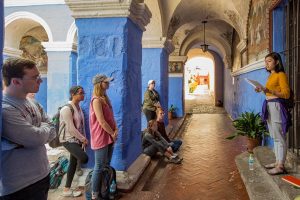 Dean Coon and Professor Sexton have taught the second semester of H2P since 1999. They also developed Medieval Bodies/Medieval Spaces, an interdisciplinary honors colloquium that traces the evolution of western medieval history through text, ritual and built environments.

Editor’s Note: The following news is from the UT College of Liberal Arts.

Plan II is pleased to announce Dr. Alexandra K. Wettlaufer as our new Director, following Dr. Michael Stoff who served as the program director for the past 11 years. Dr. Wettlaufer has been the Plan II Associate Director since 2005, overseeing the program’s senior thesis course and developing a deep love for the program and our students.

She is a Professor of French and Comparative Literature, specializing in 19th-century literature, visual arts, culture, and gender studies. A recipient of a 2014-15 Guggenheim Fellowship, Dr. Wettlaufer is currently working on a book project entitled “Reading George: Sand, Eliot and the Novel in France and Britain, 1830-1900.”

She is the author of three previous books: Pen vs Paintbrush: Girodet, Balzac and the Myth of Pygmalion in Post-Revolutionary France (2001), In the Mind’s Eye: The Visual Impulse in Diderot, Baudelaire and Ruskin (2003), and Portraits of the Artist as a Young Woman: Painting and the Novel in France and Britain, 1800-1860(2011).  She has published numerous articles on Balzac, Sand, Baudelaire, Zola, Manet, Ruskin, Turner, Berlioz, Grandville, and Flora Tristan; her article “She is Me: Tristan, Gauguin, and the Dialectics of Colonial Identity” (Romanic Review,2007) was awarded the Nineteenth-Century Studies Association Essay Prize, Honorable Mention.