In his Rhodes Scholar interview, Robert Fisher was asked to talk about something he had seen that was strikingly beautiful.  The honors student from the University of Tennessee at Chattanooga knew at once what he wanted to say:

“Looking out from Sunset Rock, on Lookout Mountain in Tennessee…Chattanooga is nestled between two mountains and a river runs through the city.  The real beauty in that view comes from knowing the place: I could see my university downtown, the river, even the highway, I could see where it goes.  I could see it all.” 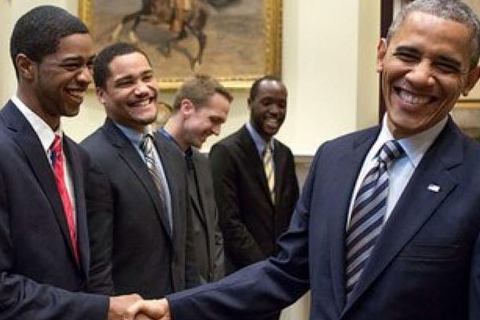 One reason that Robert could “see it all” as such a young man is that as a Brock Scholar at UT Chattanooga he was challenged “to be an advocate, to become a civic leader, to tackle some really tough issues in the college and in the community.”  In the process, Robert evolved, as he puts it, to a point where the relationship between the university and the city of Chattanooga became his central focus.

Much of that evolution came from honors coursework and from the mentoring hand of a Brock Scholars alumnus, Demarcus Pegues, now a doctoral student at Columbia University.  Demarcus had already worked as an intern for two summers at the Institute for Responsible Citizenship in Washington, DC.  Debbie Bell, now associate director of the honors college, helped Robert connect with Demarcus, and Robert then gained acceptance into the program and interned for two summers in Washington, where he met President Obama.

“The Brock Scholars program (now a four-year honors track incorporated into the new Honors College) was really good at encouraging us to find out who we are from the time we arrived,” Robert said.  “They were so great in putting me in touch with mentors.”

The Brock Scholars Program/ Honors College is both challenging and still small enough that mentoring is readily at hand.  The College now has 140 students, but with a new dean brought on board in 2013, Dr. Linda Frost, both staff and facilities will expand sufficiently to accommodate about 600 students.   Aside from the mentoring, the College has also taken on a role that fits perfectly with Robert’s interests: leveraging the relationship of the university and the city of Chattanooga to the benefit of both.

The College sponsored the first-ever TEDx event last October–and Robert was one of two student speakers, discussing ways to overcome some of the inequities that still exist in the rapidly-growing (and quickly improving) city.

The College has also adopted a rigorous curriculum and completion requirement, effective for Fall 2015.  Brock Scholars will have to complete at least 31 honors credits; the average completion requirement for the 50 national university honors programs covered in our recent Review of Fifty Public University Honors Programs was less demanding–28 credits.

Financial aid is also especially generous for Brock Scholars.  Dean Frost says that “in addition to their separately funded university merit scholarship and their Tennessee Hope scholarship, 30-35 Brock Scholars have been awarded an additional $16,000 scholarship ($4,000 per year) for some time.”  Honors housing is also available–apartment-style, air-conditioned, with convenient dining and laundry facilities.

Cost, location, and challenging classes were what brought Robert to UTC from his home in Clarksville, TN, and to the Brock Scholars Program.  “I wanted to go to a university that would prepare me for graduate school,” he says, and now he certainly has his wish.

“Robert is one of the most articulate, intelligent, thoughtful, balanced, mature, and charismatic students with whom I have ever worked,” says Dean Frost.  “It is the combination of all these talents that has attracted so many leading authorities to Robert, people such as the Chancellor of our own campus, the mayor of Chattanooga, the President of the University of Tennessee system, and even the governor of the state.

“All of these figures have recognized the amazing presence and intellect that characterize Robert and have sought out his leadership in their own initiatives as a result.  Only the fourth two-term Student Government President in UTC history, Robert is not just a natural leader; he is an informed, cautious, and brave one.  He has also been my colleague since I stepped foot in Chattanooga, sharing and developing ideas with me about the founding of our Honors College.  And well he should because it was the Brock Scholars Program, our long-standing four-year honors program, that brought Robert to our campus and that has afforded him many of the experiences that helped him develop his leadership abilities and style.”

His experiences in Washington, one result of honors mentoring, gave strong focus to Robert’s interest in public service.  Now as a senior at UTC, Robert’s passion is finding ways to strengthen what he sees as the mutually beneficial relationship between the university and the city of Chattanooga.   Robert has served as co-chair of the Downtown Task-force for Mayor Andy Berke’s Chattanooga Forward  Initiative, working to bring more energy, dynamism, and inclusiveness to downtown Chattanooga.

The former star debater in high school says his debate coach also made a great contribution to his successes in college and in the competition for prestigious scholarships.  As Dean Frost noted, Robert is exceptionally articulate, but he has now learned along the way that in both the honors classroom and in the sometimes contentious world of local and university governance, it is not sufficient to be able to take one side or another of an issue and argue it effectively, regardless of where one’s personal values lie, because government in action is about reconciling values that can be extremely personal.

In the much more real world of city and university politics, almost everyone has strong convictions; listening, thinking and reasoning through divisive issues, respecting other views while advocating for your own–all of these skills are much more important and harder to master than simply declaiming on this or that side of a single issue.

In debate, Robert says, he could separate his inner person and beliefs from the position he was assigned to argue in competition.  Sometimes he might agree, or partially agree, or even completely disagree with the argument he had crafted and presented for the competitions.

But in honors humanities classes, Robert learned not only “how to state an answer but how to reason your way through to find the answer, and how to deal with disagreement in a civil manner.”

Honors humanities seminars were “foundational” for him and other students because of the critical learning skills they developed, but the courses also taught honors students how to “become better persons” through sharing honest insights, discovering similarities and differences, and often developing more subtle or comprehensive views.

“That’s healthy because it invites us to have a more thoughtful approach to understanding something, and to challenge ourselves, to evolve—the beauty of my experience in college has been to use all that I’ve learned–my government leadership, the academics, my personal development–the confluence of the personal, the academic, and the professional.”

If Robert’s accomplishments and interests make him sound like an ideal candidate for a Truman Scholarship, which is awarded to outstanding juniors who plan to make a contribution through public service, well…Robert did win a Truman Scholarship in 2014, and he was a Presidential Fellow in 2013-2014.  “I have four years to begin using the Truman Scholarship,” he said, “and so now I can go on to Oxford [as a Rhodes Scholar] and get a master’s degree first.”  At Oxford, he plans to study comparative social policy.  Later, he might consider a doctoral program at UCLA, Columbia, or perhaps someplace else.

And…if Robert’s accomplishments also sound like those of a young man who might seek elective office, then the answer is yes.  “I certainly have an interest in running for public office, and I like to see the changes up close as they happen–and so local government is really interesting.”

With continued support from both parents, who “from kindergarten on, had very high expectations for both my sister and me,” and with the lessons already learned at UTC, Robert Fisher’s vision will continue to grow during his time at Oxford.  The view from that storied university is as expansive as it gets, especially for someone who has been to Lookout Mountain, Tennessee, and heard freedom ring loud and clear.