Heralded as the biggest international award since the Rhodes Scholarship, the Schwarzman Scholars program “is the first scholarship created to respond to the geopolitical landscape of the 21st Century. Whether in politics, business or science, the success of future leaders around the world will depend upon an understanding of China’s role in global trends.”

The program gives scholars the opportunity “to develop their leadership skills and professional networks through a one-year Master’s Degree at Tsinghua University in Beijing – one of China’s most prestigious universities.”

The 142 Schwarzman Scholars in the class of 2019 were selected from over 4,000 applicants. The class includes students from 39 countries and 97 universities with 41% from the United States, 20% from China, and 39% from the rest of the world.

The percentage of students from U.S. universities is much greater than the percentage of students who are from the U.S., however. For example, of the 25 students from Harvard who have won the award during the first three years, ten are from other nations. Of the five scholars from UNC Chapel Hill, four are foreign students, three of whom are from China. Half of the winners from NYU are foreign students.

With 25 scholars thus far, Harvard is by far the cumulative leader. Like the Rhodes Scholarship, the Schwarzman program, at least at this early stage, shares the Rhodes preference for graduates of elite private universities (and the service academies). After Harvard, the schools with the highest totals across three years are Yale (16), Princeton (15), West Point (11), MIT (10), NYU (9), Oxford and Stanford (8), Cambridge, Cornell, and Duke (7), and Penn and Annapolis (5). UNC Chapel Hill, the leader among public universities, is tied with Penn and Annapolis, with five scholars. 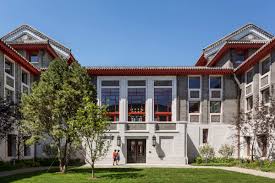 Scholars have their own residence at Tsinghua University, on the campus of Schwarzman College, a newly-built, state-of-the-art facility, where all classes are taught in English. Students pursue a Masters in Global Affairs, with concentrations in one of the disciplines:

The official statement on admissions states that the “selection process prioritizes academic excellence and leadership potential without regard for the university or college where the candidate studied, assuming the institution was properly accredited. Outstanding scholars and leaders may come from a wide variety of institutions.”

There are no set GPA standards for selection, though academic excellence is definitely required. Applicants can be graduate students and must be between 18 and 28 years of age, as of August 1, 2018. Important application materials include:

“Students spend a year immersed in an international community of thinkers, innovators and senior leaders in business, politics and society. In an environment of intellectual engagement, professional development and cultural exchange, they learn from one another and pursue their academic disciplines while building their leadership capacities. This experience will expand students’ understanding of the world and create a growing network of global leaders for the future.”