Editor’s Note: This post is by Jill Goetz, Karna Walter, and Emily Kotay of the University Arizona College of Engineering and Honors College and was first published on January 17, 2016, on the UA News site.

Two University of Arizona seniors have won prestigious Churchill Scholarships to complete a one-year master’s degree program at the University of Cambridge in England.

UA College of Engineering majors Travis Sawyer and Jeannie Wilkening, both students in the Honors College, are two of only 15 Churchill Scholars selected in 2016-2017 for outstanding academic achievement and proven research talent in science, engineering or mathematics.

Both are the third and fourth UA students to receive the award since it was first granted by the Winston Churchill Foundation of the United States in 1963.

The UA is able to nominate only two students to apply for the Churchill Scholarship each year, and this year is the first time that both UA nominees have been awarded the scholarship.

Churchill Scholarships range from $50,000 to $60,000 and cover a year of tuition and fees at Cambridge University’s Churchill College. Scholars also receive travel and living allowances and may get additional funding for presentations at international conferences and visits to other universities.

Sawyer is majoring in optical sciences and engineering, a program jointly administered by the College of Optical Sciences and College of Engineering. He is developing visual recognition software using different wavelengths, such as infrared and X-ray, to help scientists capture more detailed images for making discoveries in fields as different as art preservation, astronomy and medicine. 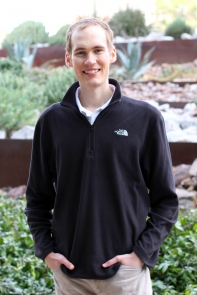 For his master of philosophy, or MPhil, degree in physics, he will conduct research on applying hyperspectral imaging for detecting early-stage cancer with Cambridge scientist Sarah Bohndiek, whose lab is affiliated with the Cancer Research UK Cambridge Institute.

An Optics Ambassador with a 4.0 grade-point average throughout college, Sawyer came to optics in an unusual way. He was misdiagnosed with leukemia his freshman year and became fascinated with the optical instruments doctors used to examine him and, ultimately, ensure he was healthy.

Sawyer’s rising stardom was recognized in 2014 with a $10,000 Astronaut Scholarship, which he won again in 2015 — a first-ever feat at the UA. In 2015, he also won a Goldwater Scholarship, and his UA student team won the Robert S. Hilburn Memorial Optical Design Competition for its camera system to be sent to Saturn’s moon Titan.

“Hopefully, I can make a contribution or invent a technology that helps someone in the same way optics helped me,” Travis Sawyer says.

Sawyer credits his research mentors for their guidance. After Cambridge, Sawyer plans to pursue doctoral and postdoctoral work and establish his own research lab as a university professor.

Engineering for a Healthier Planet

Chemical engineering student Jeannie Wilkening studies how human activity affects biogeochemical cycles, the movement of water and other compounds through the atmosphere, hydrosphere and biosphere. She is particularly interested in how these processes relate to climate change and in developing models for more environmentally sustainable technologies.

“My experiences over the past four years have been instrumental in getting me to this point. I’ve been surrounded by incredible faculty, friends and classmates who have supported me, challenged me and taught me so much,”  Wilkening says. 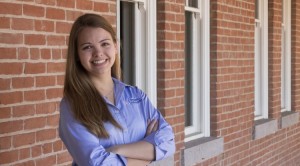 For her MPhil in earth sciences, she will conduct research with Cambridge scientist Alexandra Turchyn on carbon, sulfur and iron cycling in marshes and climate implications.

The Churchill Scholarship is the latest in a string of top honors and internships for Wilkening. She entered the UA as a National Merit Scholar and Flinn Scholar and, like Sawyer, won a Goldwater Scholarship in 2015.

She won a NASA Space Grant and interned at Princeton University and the University of Michigan through the National Science Foundation’s Research Experiences for Undergraduates Program. She belongs to the Tau Beta Pi and Omega Chi Epsilon engineering honor societies, is an Ambassador for both the Honors College and the College of Engineering and is president of the UA chapter of the Society of Women Engineers.

“Since I was a child, I have been incredibly fortunate to be surrounded by great female role models who instilled a passion in me for science and engineering,” Wilkening said.
One of them was her mother, Betsy Wilkening. After earning her own bachelor’s degree in chemical engineering from the UA in 1982, she became a popular science teacher at Richard B. Wilson Jr. Middle School. Two of her students there were Wilkening and Sawyer.

After Cambridge, Jeannie Wilkening plans to return to the U.S. to pursue a Ph.D. in environmental engineering and then an academic career, teaching and conducting research.