Editor’s Note: The following post is by Marcene Robinson of the University at Buffalo.

BUFFALO, N.Y. — Phillip Tucciarone, a University at Buffalo chemical and biological engineering student, has won a Marshall Scholarship, one of the most prestigious scholarships awarded annually to U.S. college students.

Tucciarone is the first UB student to win a Marshall Scholarship since 1988 and is also a 2013 recipient of the Barry M. Goldwater Scholarship.

Up to 40 American students are awarded a Marshall Scholarship each year.

“This feels incredible and is a wonderful surprise, to be honest,” said Tucciarone, who will leave for London in September. “The award secures an exciting academic future for me over the next four years and makes a statement about the value of public higher education.” 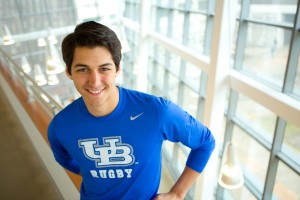 The Marshall Scholarship is widely considered one of the most prestigious scholarships in the world, and works to strengthen the relationship between British and American citizens, and their governments and institutions.

“The Marshall Scholarship is a mark of great distinction — these are not just some of the nation’s best and brightest young scholars, they are intellectually passionate, globally minded students dedicated to enriching the world around them,” said UB President Satish K. Tripathi. “This is exactly the kind of student that UB excels in educating.

Inspired by a desire to become a professor of materials science, Tucciarone will use the Marshall Scholarship to pursue a doctorate degree in materials science at either the University of Oxford or the Imperial College of London. He plans to join the groundbreaking research currently underway on graphene, one of the crystalline forms of carbon.

Graphene is considered the material of the future, Tucciarone said.  It has the potential to make electronics much faster, for example, and its most immediate use can be found in transistors, radio frequency devices and computer chips.

“If copper is your grandma’s Buick, then graphene is the new Ferrari,” he said.

Tucciarone has devoted much of his undergraduate research to nanomaterials and the development of methods of non-toxic bio-imaging, which play a role in cancer treatment. He has also co-authored and published two academic papers on his research in ACS Nano and Nano Letters, both monthly, peer-reviewed, scientific journals published by the American Chemical Society.

“In my 20-plus years teaching at UB, I’ve never seen such a display of leadership in one of my students,” says David Kofke, SUNY Distinguished Professor of Chemical and Biological Engineering. “It is heartening to see this in an engineering student, where the workload promotes immersion in coursework without allowing time to take in the larger picture in life, let alone participate in it.”

A UB Honors College scholar, Tucciarone is president of the Honors Student Council, and works with inner city public schools through UB’s Interdisciplinary Science and Engineering Partnership, funded by the National Science Foundation, which seeks to improve science education in Buffalo Public Schools.

As a junior, he founded an annual volunteer service trip to the Dominican Republic through the Honors Student Council, where he and other UB students helped teach English to children.

Tucciarone said he was inspired to pursue a career in higher education by his experiences at UB, combined with his volunteer work in Buffalo Public Schools and the Dominican Republic.

“The faculty at UB is incredible,” said Tucciarone. “I never felt disconnected from them and they engaged me from day one in the classroom and as personal mentors.

“Education is the strongest mechanism for change in the world,” he added.  “I want to bridge the gap between the United States and U.K. as a diplomat, gain experience, and work as a bridge for bilateral research and higher education.”

Education and science are just a few of Tucciarone’s many passions. He is starting winger for UB’s rugby team, and hopes to play for the Oxford Blues, the University of Oxford’s rugby team, when he moves to England next fall.  A jazz enthusiast, Tucciarone played trombone and bass in a swing band, and bass in a blues/rock band, Blank Check, in Washingtonville.

The highly competitive Barry M. Goldwater Scholarship and Excellence in Education Program was founded in 1986 with the goal of alleviating the critical shortage of highly qualified scientists, mathematicians and engineers.