Editor’s Note: The following post was written by Tricia Brown of the University of Iowa.

University of Iowa student Jeffrey Ding says he’s unsure yet how being named a Rhodes scholar will change his life, but he’s already getting more than the usual number of friend requests on Facebook. 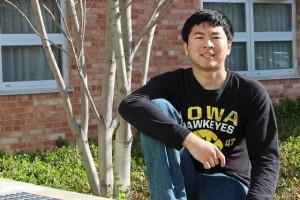 Ding, a senior from Iowa City, was selected as one of 32 American Rhodes scholars on Nov. 22 from a field of 869 applicants; 90 are named worldwide. He’ll receive $50,000 annually for two years and will have the opportunity to attend Oxford University in England.

“I feel a mix of excitement and gratefulness,” Ding writes via email from Beijing, where he’s enrolled in Peking University’s School of Economics. “I’m excited to make the most of this opportunity to study about the world at Oxford, and I am grateful to all the people who made this opportunity possible.”

Ding, a member of the Honors Program and a student in the UI’s Henry B. Tippie College of Business and the College of Liberal Arts and Sciences, will graduate in May with degrees in economics (B.B.A.), political science (B.S.), and Asian languages and literature (B.A.), along with a certificate in international business.

He adds the Rhodes scholarship to his cache of other awards and honors. Earlier in 2015, he was awarded the Udall scholarship and the Truman scholarship. He is the only UI student to have received all three. He arrived at the UI as a first-year presidential scholar, the highest award the UI gives to incoming undergraduates. He’s also the recipient of the Stanley undergraduate award for international research and was named a Boren scholar through UI International Programs.

A total of 19 UI students have been awarded Rhodes scholarships since 1905. The university’s most recent Rhodes scholar was Renugan Raidoo, in 2011.

“Jeffrey has had an incredible experience here at Iowa,” says Kelly Thornburg, director of scholar development at the UI Honors Program. “Being a part of the Rhodes scholar community will help him make what he was already doing that much more extraordinary. More than the money, it’s really about the greater connection to other people who are like him and who care about the world in the same way and will challenge him to do more in ways he might not have considered.”

The Rhodes scholarship is a well-deserved honor for Ding, and for the entire campus, says P. Barry Butler, UI executive vice president and provost.

“Jeffrey’s achievements exemplify the world-class academic experience available at the UI,” he says.

Ding has been involved with the UI Climate Narrative Project, for which he presented in-depth research and performed field studies and personal interviews with farmers and agricultural experts. He served as vice president of the UI Student Government and is a member of the Chinese Church of Iowa City.

Thornburg says that aside from being “very, very smart,” Ding is just like other people his age.

“He’s not an intellectual snob,” she says. “He loves tennis and plays video games and is pretty obsessive about sports. He’s very good at choosing where he spends his time. He’s also a lot of fun and a good friend.”

She says she thinks Ding won this award because he makes getting to know people a priority, and he seeks out ways he can help others. He has also cultivated strong relationships with many UI faculty members and takes a genuine interest in their research.

“He really sees people,” she says.

At a time when UI athletics is receiving so much attention—the football team was named champion of the Big Ten West division after defeating Purdue on Nov. 21—Thornburg says Ding’s award is a testament to the quality of the university as a whole.

“The University of Iowa offers really incredible opportunities to undergraduates. It is amazing that we are doing so well in football, and it is so wonderful to have this very prominent example of what our students are able to do as scholars and leaders on our campus,” she says.

Ding is approaching this honor with modesty. He says people aren’t surprised when they learn he is from Iowa.

“I have so much love and pride for both Iowa and the University of Iowa that people who know me and find out that I received the Rhodes already see Iowa as a part of who I am,” he says.