Serving a major public university as president for 19 years is a strong legacy in itself, but outgoing University of South Florida President Judy Genshaft and her husband, Steven Greenbaum, also announced in May a $20 million donation to help build a new honors college building. Then, on June 1 at a retirement gala for her, they donated an additional $3 million to endow the position of Dean of the Judy Genshaft Honors College. 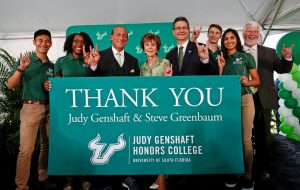 Together these donations should propel the university and the JGHC to even loftier status. Under Genshaft’s leadership,  USF has already risen to “preeminnent” status among Florida’s universities. The status, designated and approved by the Florida Board of Governors, is based on 12 benchmarks, including graduation and retention rates. The designation leads to greater funding to attract new students, recruit faculty, and promote research. The only other preeminent universities in the state thus far are the University of Florida and Florida State University.

The major part of the donation to the JGHC will fund almost half of the total cost of a new honors building, to be built just to the north of the Muma College of Business. The five-story building will feature office, classroom, meeting, and lounge spaces for students and faculty.

JGHC Dean Charles Adams says that the gifts “will allow us to greatly enhance our programmatic and curricular offerings, and expand our enrollment,” which is planned to increase from the current level of 2,200 students to around 3,000 students in the next five years. The honors college is already known for its large number of interdisciplinary, honors-only class sections.